What are the characteristics of electronic injuries?

Electronic injuries abound daily! If I had 25 cents for every patient I speak with about changing the way in which they use phones, iPad, iPhone, tablets, laptops and sit at their work station, I would be a rich woman indeed!

I see a lot of repetitive strain issues (electronic injuries) as patients don’t sit with normal alignment when using their devices. Nearly two decades after the smartphone and tablet’s arrival, evidence is emerging that the bent-forward posture often used while texting is very difficult on the neck (causing ‘text neck’), mid and lower back, and shoulders. Our “electronic posture” can also cause cell phone neck, upper back, elbow, as well as wrist and thumb pain. Technology is creating more digital disabilities!

Below, I have included a list of common problems I see every week in the clinic and treat with a combination of active release technique and chiropractic adjustments to the bones (including the shoulder, elbow, wrist, and thumb. Many patients think I just treat necks and backs). 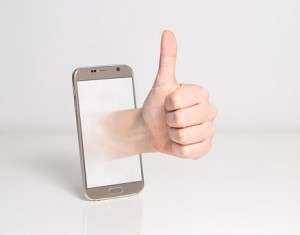 Many people hold their electronics with their palm behind the device, wrapping their thumb around the front to make use of the device. Doing this will cause the thumb to extend out too much and cause many issues with this digit. One of our patients, Mark, remarked to us: “If I had known I would have so many issues with my thumb due to the way I held my phone, I wouldn’t have done this! I cannot believe when you have a thumb issue how much it limits what you can do.”

Frequent texters might notice a painful snapping when bending the thumb. Other overuse symptoms include tenderness, pain, tingling, and loss of sensation or strength. If your thumb starts to bother you, have it looked at and change the way you hold your electronics!

Whether typing, swiping, or tapping, people are stressing an array of muscles, nerves and tendons in the wrist and up into the forearm. Movements that might seem minor can wreak havoc when done repeatedly with force. I have been in practice for over 30 years and I am astounded at how many younger patients are having so many issues! And it is not just ‘because of their age.’ 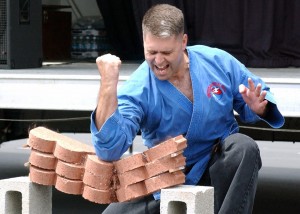 When using their electronics, many patients hold their devices while not resting their elbows properly. When bending your elbows while holding your device, you are placing incredible tension on the elbows and forearms. This will cause you to constantly contract the muscles, tendons, ligaments, and nerves. This also places tremendous strain on the elbow joints and bones of the forearm.

I am seeing an epidemic of rounded shoulders in the clinic. Rounded shoulders are causing a greater incidence of rotator cuff and frozen shoulder problems. When your shoulders round forward as you look down at your devices, you are essentially changing the alignment of your neck, shoulders, upper back, and lower back. The muscles in the fronts of the shoulders tighten, shorten and develop adhesions, and shoulder joints become compressed together.

Over time, rounded shoulders straighten the neck, leading to osteoarthritis ‘wear and tear’ in the neck. I am seeing this more and more in people younger than 20! It is not all due to aging but rather what we do with our bodies as we age.

If your shoulders are rounded, it is difficult to sometimes hold the neutral alignment of your spine due to imbalances. Have your shoulders worked on to avoid future issues. If you have rounded shoulders, a combination of active release for the muscles and tendons is effective with adjustments for the joints that have become compressed or restricted. 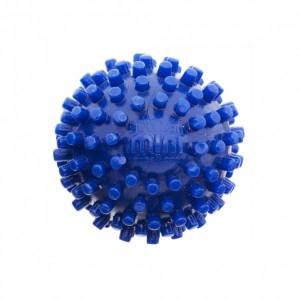 Check out this video for shoulder pain and aiding your rounded shoulder syndrome due to electronic injuries. 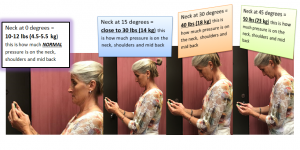 “Text neck” has become a catchphrase describing neck pain and damage from looking down at your cell phone, tablet, or other wireless devices too frequently and for too long.

Consider that when your head and neck are in neutral alignment, the head weighs between 10-12 pounds. If you bend your head forward

(noted a 2014 study in Surgical Technology International)! This weight hangs off neck ligaments, muscles and bones.

A bent-neck posture, which is seen in many classrooms, is “implicated in neck pain,” according to a 2015 study in Ergonomics. This study found that the mechanical demand on neck muscles is three to five times greater with such flexion than a neutral posture for seated tablet users.

Tablet stands, external keyboards, voice dictation, neck support and styluses could help prevent discomfort. Look into having your device in an ergonomic position!

Lower back and spinal issues from leaning forward

Leaning forward over our devices places greater pressure on discs in the lower back. Joints become restricted and muscles become imbalanced. Bending forward by just 20 degrees places 100% more tension on the lower back discs, muscles and joints!

Rene Cailliet, MD, a specialist in physical medicine and rehabilitation at the University of Southern California found that  “Incorrect forward head posture leads to improper spinal function. Both the neck and lower spine have normal and necessary forward and backward curvatures relative to the skull, […] thoracic spine and rib cage. Proper cervical and lumbar [curves] are necessary for normal muscle function. However, with a forward extended head, normal [curves are] lost both in the cervical and lumbar spine.”

Check out this article about the inter-relationships of posture, stance, digestion, balance, and much more! Dr Pettibon is a leader in this field.

Lung capacity is depleted by as much as 30 percent with electronic injuries. This shortness of breath can then lead to cardiovascular disease. The entire gastrointestinal system is affected, particularly the large intestine. Loss of good bowel peristaltic function and evacuation are common causes of forward head posture. The gut is the largest endocrine organ in the body and 70 percent of the immune system is in the gut.

What can I do to help reverse and prevent electronic injuries?

The body has approximately 440 pairs of muscles, with 75 pairs of those being responsible for posture. Imagine what happens to these when you round forward?

The first step to solving your electronic injuries is being aware of the problem! Many symptoms of electronic injuries have been listed above, but symptoms can also include headaches, spinal disc degeneration, curvature of the spine, pinched nerves, muscle spasms, balance problems and vision problems.

Having good posture will definitely help reverse and avoid electronic injuries. When I was younger, my mom would always say to me, ‘Straighten up’. Try to do this when using your devices!

Take frequent breaks from your devices to rest your muscles, tendons, ligaments and spine.

And visit one of our chiropractors, Dr Barbara Rodwin and Dr Noor Al-Hashimi. They are qualified to correct neck and spine misalignments caused by electronics, as well as other injuries listed above. They will also design a treatment plan to correct the problem and alleviate symptoms, including exercises to strengthen weakened muscles. 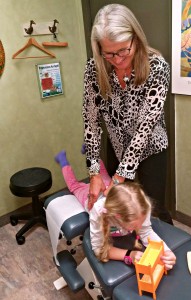 This picture of Dr. Rodwin adjusting Dejana proves that chiropractic adjustment can be fun!

For additional stretches to aid with your electronic injuries, please visit our website.