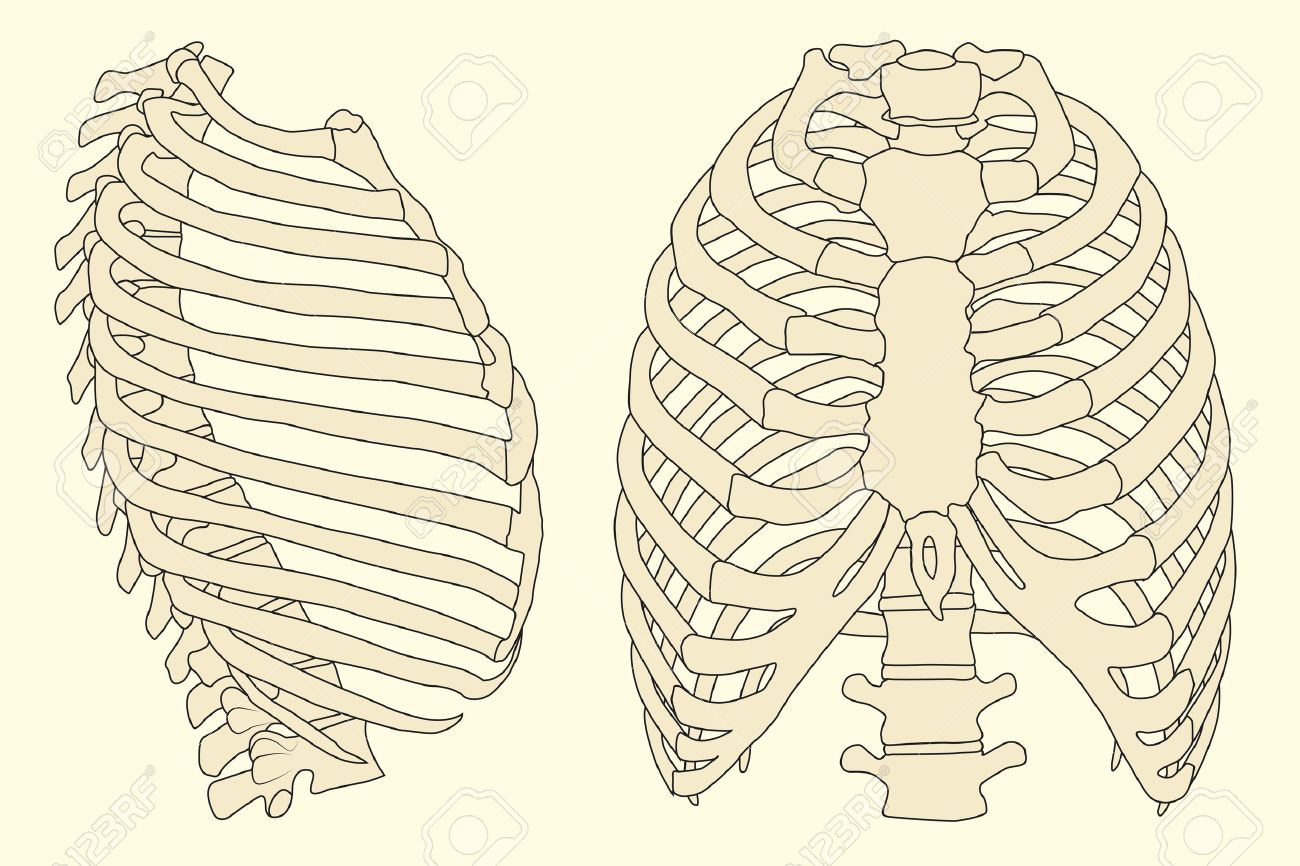 Ribs and the Spine

Anatomy of the Ribs and Spine

The neck ends at C7 and then the thoracic spine transitions into the chest area or thorax cavity. The thoracic vertebrae are numbered T1-T12—each with a pair of ribs. With ribs comes more prominent Transverse processes (the picture shows them coming off the side of T1). These transverse processes have the ribs at the end of them. The rib tip sits on the vertebral body and rests against the front tip of the transverse process.

One pair (left and right) of ribs per thoracic level make 24 ribs or 12 pairs.

The ribs from T1-T10 make it around to the front and touch the breast bone (sternum). The Rectus Abdominus muscle (six pack muscle in the front) is where the 9-10 rib boundary is. Ribs 11 and 12 are short and are called floating ribs.

The picture shows a rib from the top. The bump sticking out is where the vertebrae joins with the rib. 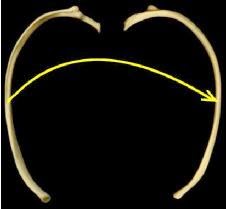 At each level, the rib shape is contoured differently to define the shape of the chest.
Ribs are not horizontal, they slant downward as you trace them forward. Bands of muscles attach ribs to one another.

These muscles raise and lower the ribs like the handle of a bucket. This is the bellows with which we breathe. A sheet of muscle which seals off the bottom of the chest cavity—the diaphragm— moves upward and downward to also expand the space in the chest cavity. This is a second breathing mechanism. 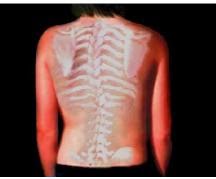 Any of these joint areas can become misaligned due to sitting incorrectly, sleeping in an awkward position, coughing, sneezing, due to spinal curves, scoliosis, asthma, allergies and other conditions such as Scheuermann’s disease, arthritis.

You can feel tension in the upper back, shoulders, and it can lead to pain. 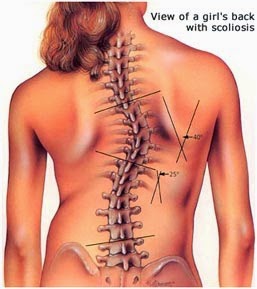 Some people have abnormal curves in the back and they do not have scoliosis. There is however with the abnormal curve loss of vertebral joint motion, muscle imbalances and rib restrictions.

The “curve” of scoliosis can be measured in several ways. The most common way is to measure in the number of “degrees”. Normally, the vertebrae are stacked as blocks that are stacked parallel to each other. If the stack bends, then the surface of one block will project an angle to the other ones. This is the angle which is measured.

Scoliosis causes the ribs to rotate, muscles to be short on one side, long on the other and vertebrae to become wedged and lose motion. This can be treated at any age and correction can occur.

Chiropractic adjustments for rib problems
When a rib loses motion or becomes restricted a person can experience a spectrum of symptoms. Sometimes it is described as a “spot in the upper back”—often it is thought it is muscular, tension in the top of the shoulder, discomfort in the chest/back, pain in the back/chest/arm, a sharp knife-like pain, sometimes there is difficulty breathing in or out deeply (dependant on which rib is restricted). Some people have a variety of tests for their heart before figuring out it is a rib problem.

The chiropractic treatment is first aimed at ruling out serious medical problems. It is then followed by a detailed examination of the joint, muscles, ligaments and tendons.

Dr. Rodwin assesses the movement of each of the individual ribs, the attach-ments to the sternum and vertebrae.

If it is found there is a loss of motion— the aim is to restore the movement, address the muscle adhesions, any postural problems or weakness are identified and a course of action is taken. Exercises are normally given to aid in helping, postural advise, and sleeping habits checked. Some female patients have had breast reductions to help reduce the strain on the muscles, ribs, vertebrae in the mid back.

Chiropractic treatment is always worth considering if you have any upper back, chest, shoulder or arm pain.

Active Release technique for muscles involving the ribs
When there are rib problems there are normally adhesions/scar tissue in the muscles, ligaments, tendons either between the ribs, the chest, in the shoulder blade area, the muscles in the top of the shoulder (secondary problem due to compensation), the shoulder and even the arm. These adhesions/scar tissue binds up and ties down tissues that need to move freely. As scar tissue builds up, muscles become shorter and weaker, tension builds on tendons causing tendonitis and nerves become trapped. This can cause reduced range of motion, loss of strength and pain.

Active release is used to reduce the adhesions/scar tissue, which then al-lows the muscles, tendons, ligaments, and nerves to be restored to their normal resting length and function.