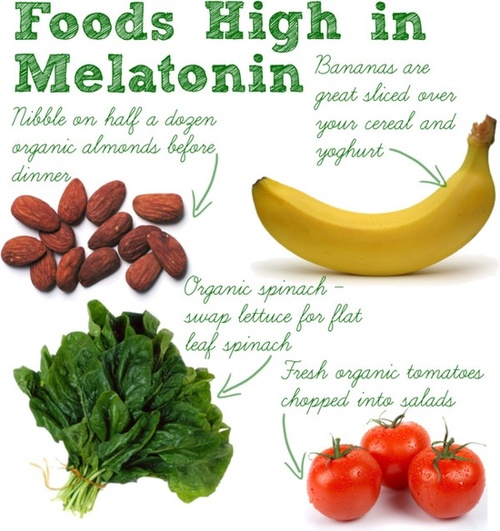 By backtohealthJuly 21, 2014July 15th, 2015No Comments
Melatonin for sleep and foods rich in this

Melatonin is a hormone produced in the body by the pineal gland and also produced in the gastrointestinal tract. This hormone plays a key role in synchronizing circadian rhythms and helps regulate the sleep-wake cycle in mammals. In addition to this function, melatonin is a potent antioxidant that protects the body from free-radical damage. Synthetic melatonin has gained popularity in recent times as a nutritional supplement, melatonin can be found in a variety of foods. As we age melatonin production decreases and the amount of light affects melatonin production.

Melatonin acts as an antioxidant by directly scavenging damaging agents that promote inflammation and ageing and can cause conditions including cancer and cardiovascular and neurological problems. Although more research is needed, there is consensus about the potency of the compound in this respect: Regardless of a specific, curative effect, melatonin consumed through food can provide healthy levels of antioxidants.

Melatonin from a food source is typically used for its health benefits and not as a sleep aid. This is primarily due to the quantity, spread and time at which melatonin is consumed through food. If melatonin use is primarily for regulating sleep patterns or to alleviate the symptoms of jet-lag, then an over-the-counter supplement may be a better choice. Always consult your doctor of chiropractic or naturopath before using supplements, because they could interact with other medicines.

If you suffer from occasional insomnia or if it’s a nightly battle for you, you’ve likely looked at all of the natural solutions currently out there. You may have even tried some melatonin supplements, and if you’re like many individuals, had some disappointing results. If you have you may need to combine the melatonin with other natural supplements used to make the serotonin so you can sleep! If this is the case please ask what would be best for you.

Melatonin is a hormone produced by the pineal gland. Not only does it control your circadian (sleeping and waking) cycles, but it is responsible for regulating other hormones as well. It plays a role in regulating female reproductive hormones including menstruation and menopause.

While young people have the highest melatonin levels, production of this hormone wanes as we age. Some scientists believe this is why older adults struggle more with sleeping for the recommended amount of hours or even why they may go to bed earlier and wake up before the sun.

Have you tried boosting Melatonin Production Naturally? Read on…
Several factors can throw off the body’s natural melatonin production. These include a time change, jet lag, shift work, and even poor vision. And, as stated, it generally decreases in production as we age.

While some of these foods only contain a small amount of melatonin, by incorporating them in wide varieties into your daily diet, you can try to obtain more melatonin to make up for the amount that your body lacks.

Foods not high in melatonin but aid in sleep patterns:
Almonds (as high in magnesium which is needed to produce melatonin), Cheese and crackers (tryptophan found in the dairy which aids in producing melatonin), lettuce (contains lactucarium which has sedative properties), fish such as tuna, halibut, and salmon are high in vitamin B6, which your body needs to make melatonin and serotonin: other foods high in B6 are raw garlic and pistachio nuts, chamomile tea (increase in glycine which relaxes nerves and muscles and acts like a mild sedative), Passion fruit tea (alkaloids are found in high levels in the flower and they act on our nervous system to make us feel tired), honey (slightly raises insulin and allows tryptophan to enter the brain more easily, kale (loaded with calcium, which helps the brain use tryptophan to manufacture melatonin), shrimp, lobster and hummus (good sources of tryptophan).