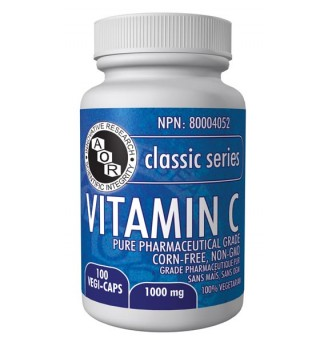 AN ESSENTIAL VITAMIN AND ANTIOXIDANT

Vitamin C is a factor in the normal development and maintenance of bones, cartilage, teeth, and gums. Ascorbic acid is also an excellent antioxidant.

Take one capsule daily with or without food, or as directed by a qualified health care practitioner.

The Many Roles of Vitamin C

Ascorbic acid is vitamin C, a nutrient that is well known to be essential for health. Vitamin C was first recognized for its role in the formation of collagen, which is the connective tissue of skin, bones, cartilage, teeth, muscles and blood vessel walls. Vitamin C is also useful as a treatment for colds, likely due to its effects on the immune system. Modern research has found a wide variety of other important roles that ascorbic acid plays in the body.

Ascorbic acid is a powerful antioxidant. It is particularly important for protecting lipids and fat-soluble vitamins from the damage caused by free radicals, the oxidative byproducts of cellular metabolism. Ascorbic acid also has a role in detoxification and helps to prevent the formation of certain carcinogenic products.

In addition to its roles as a powerful antioxidant, detoxifying agent, and cellular protector, vitamin C also has beneficial effects on the cardiovascular system through its influence on elevated blood pressure and cholesterol levels.

Unlike other water-soluble vitamins, vitamin C, or ascorbic acid, doesn’t appear to act either as a catalyst or as a coenzyme. Most people think of it primarily as an antioxidant – which it is, and a crucial one at that. Ascorbic acid inhibits lipid peroxidation, oxidative DNA damage and oxidative protein damage. In this renowned function as an antioxidant, ascorbic acid seems especially prominent as a protector of lipids and lipid-based nutrients. It directly protects such fat-soluble vitamins like vitamin A and vitamin E, not to mention various fatty acids from the damage caused by the excessive oxidation of free radicals.

Ascorbic acid appears to have a preventative effect on cancer. This may be accounted for, in part, by ascorbic acid’s ability to detoxify carcinogens directly, as well as blocking carcinogenic processes via its antioxidant activity. High concentrations of ascorbic acid in gastric juice may reduce the risk of gastric cancer by inhibiting the formation of carcinogenic N-nitroso compounds. Additionally, increased oxidative stress to the gastric mucosa has been reported in Helicobacter pylori-associated gastritis, a condition that predisposes to gastric cancer. There is preliminary evidence suggesting that vitamin C can inhibit the growth of Helicobacter pylori.

The well-worn association between vitamin C and the common cold may be explained by the anti-histamine effects of the vitamin. These same effects also reduce the immunosuppressive activity of histamine.

Ascorbic acid may protect against asthma and other obstructive pulmonary diseases, as well as protect the airways against the effects of allergens, viral infections and irritants. Allergens, viruses and irritants, including ozone, nitrogen oxides and sulfur oxides, subject the airways to increased oxidative stress and inflammation which can lead to bronchoconstriction. While the antioxidant properties of ascorbic acid are obviously critical in dealing with such conditions, its newly re-examined anti-inflammatory role can also be accredited.

Ascorbic acid also acts as a cofactor in various biochemical reactions to reduce the transition metals, iron and copper. It also protects against the tissue-damaging effect of some toxic chemicals and heavy metals.

Beyond its antioxidant role, one of ascorbic acid’s primary activities is the regulation of collagen formation. Without vitamin C, collagen formation is disrupted, causing a wide variety of problems throughout the body.

How Much Vitamin C Do We Need and Which Type Is Best?

The officially recommended daily allowance of vitamin C, which stands at 90 milligrams per day, is an artificial figure. Most scientifically determined optimal daily allowances range from 300 milligrams to 1.2 grams each day, with some older anti-cancer clinical trials experimenting with as much as 5 grams! It should be noted, however, that dosages on that end of the scale may be biochemically inefficient as ascorbic acid is a water-soluble compound that is easily absorbed but is not stored in the body – excess amounts are simply excreted.

Be the first to review “Vitamin C” Cancel reply