View cart “Probiotic-5” has been added to your cart. 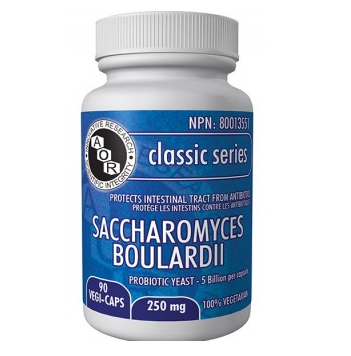 A NATURAL SOLUTION FOR GASTROINTESTINAL DISORDERS

Saccharomyces boulardii is a non-pathogenic yeast that has been shown to reduce the risk of antibiotic-associated diarrhea.

Take 3 capsules per day in divided doses between meals.

Cautions: Discontinue use and consult a health care practitioner if symptoms of digestive upset (e.g. diarrhea) occur, worsen, or persist beyond 3 days. Consult a health care practitioner if you are experiencing nausea, fever, vomiting, bloody diarrhea or severe abdominal pain. Do not use if you have an immune-compromised condition (e.g. AIDS, lymphoma, patients undergoing long-term corticosteroid treatment).

Gastrointestinal complications are a side effect of many health conditions. The use of antibiotic treatment can destroy healthy bacteria in the gut, causing intestinal complications and allowing colonization by pathogens which can cause diarrhea and other forms of intestinal discomfort. This is a major problem for many hospitalized patients. Diarrhea is also a problem when travelers are exposed to pathogens that they are not used to.

Saccharomyces boulardii is a non-pathogenic yeast which provides a probiotic solution to deal with diarrhea and other intestinal complications. The yeast can prevent gastrointestinal inflammation caused by infections, which cause diarrhea. Saccharomyces also enhances the protective functions of the immune system. It has been shown to be clinically effective in dealing with symptoms of antibiotic-associated diarrhea, Clostridium difficile disease (which is particularly problematic in hospitals) and symptoms of Traveler’s diarrhea.

Intestinal disorders are a miserable problem for many people, particularly those who are recovering from antibiotic treatment, or traveling in foreign countries. Saccharomyces boulardii provides a natural, safe solution to deal with gastrointestinal complaints without creating further side effects.

Saccharomyces boulardii is a non-pathogenic, non-colonizing species of yeast that is clinically recognized for its effectiveness in contending with the symptoms of antibiotic-associated diarrhea (AAD) and Clostridium difficile disease (CDD), which is also incited by antibiotics. CDD is a leading cause of nosocomial outbreaks of diarrhea and colitis, and Saccharomyces boulardii is one of the most widely used and highly regarded probiotics for the treatment of symptoms associated with both AAD and CDD.

The use of antibiotics can destroy friendly flora that is essential for the maintenance of optimal intestinal health. Therefore, antiobiotic use can result in an imbalance of naturally occurring yeast and bacteria that would normally be kept in check by this friendly flora. This imbalance can lead to diarrhea. Clostridium difficile is such a bacterium, and is (understandably) extremely difficult to treat with more antibiotics. In one double-blind, placebo-controlled study of 151 patients who underwent antibiotic therapy, the rate of patients suffering from antibiotic-associated diarrhea was almost 6 1/2 times higher in the placebo group than in the Saccharomyces boulardii group.

Recent studies have examined the efficacy of Saccharomyces boulardii in treating acute diarrhea in children. A recent review of five clinical trials involving a total of 619 otherwise healthy infants and children with acute gastroenteritis revealed that Saccharomyces boulardii ‘significantly reduced’ both the risk and the duration of diarrhea.

Be the first to review “Saccharomyces Boulardii” Cancel reply