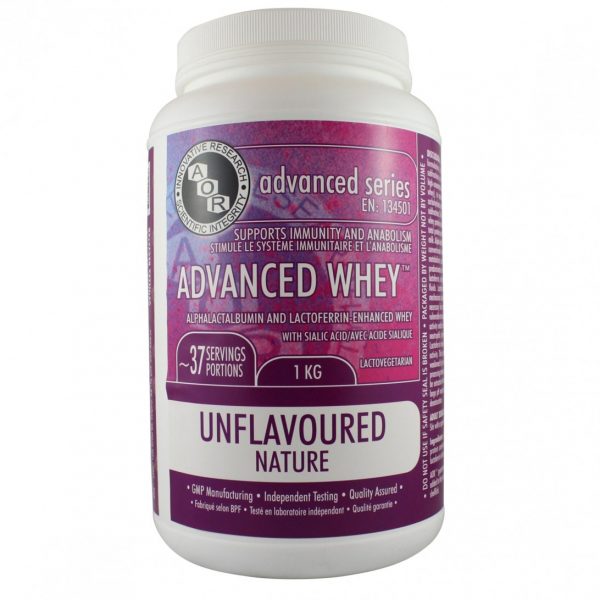 Suggested Use: Mix one or more scoops with your favorite beverage. Stir with a spoon for 30 seconds. No blender required. Please note that the vanilla flavouring is very light, sweeten to taste.

Pregnancy / Nursing: No studies have been conducted. Best to avoid.

Whey protein is an excellent source of protein. Whey protein is either processed as a concentrate or as an isolate and AOR’s Advanced Whey contains both fractions to ensure a wide spectrum of nutrients. Studies have shown that whey possesses anti-microbial, anti-carcinogenic, anti-inflammatory, cholesterol lowering, immune supporting and antioxidant properties.

Advanced Whey is fortified with extra lactoferrin and alpha lactalbumin which are both naturally present in whey. This reinforces the beneficial health properties of Advanced Whey. Lactoferrin is an iron-binding protein concentrated in bodily fluids. Lactoferrin supports immune function through several mechanisms: direct antimicrobial action, the denial of access to iron which is necessary for bacterial growth, the prevention of viruses entering cells, and the enhancement of the activity of immune cells.

Lactoferrin levels naturally increase after intense bouts of physical activity. Advanced Whey was designed to support this natural response and enhances an immune system which has been weakened by rigorous exercise.

Alpha -Lactalbumin is a high quality protein that is easily utilized by the body and helps to support normal cellular growth. Advanced Whey boasts more than 36% alpha-lactalbumin by weight, unlike others which contain 20% alpha­lactalbumin or less.

Advanced Whey also contains 6-8% Sialic acid, a protein found in saliva and mucus which prevents pathogens from entering the body.

The widespread health applications of whey protein are heavily dependent on its alpha-lactalbumin, lactoferrin, and sialic acid content. The addition of these fractions is costly, which may largely explain why their benefits are not emphasized in most whey protein supplements. Advanced Whey from AOR provides unique health benefits because it is reinforced with specific fractions and contains amounts over and above those which are naturally found in whey protein.

The use and popularity of whey protein has grown to such an extent since the mid-1990’s that it is now found in everything from general meal-replacements to infant formulas for newborns. No longer relegated to the exclusive domain of the blender, whey protein is now almost effortlessly added to cereals, yogurts, and even breads and pastries. Such widespread applications speak volumes about the unlocked potential of whey protein. Scientists speculated – correctly as it turned out – that any macronutrient that has earned such widespread acceptance has more secrets to yield. Companies such as AORTM have taken the initiative to unlock these secrets, and Advanced WheyTM represents the fruition of those efforts. Those efforts have led to the identification, isolation and emphasis of specific fractions within whey protein. These include:

Alpha-lactalbumin has been associated with anti-carcinogenic and anti-microbial activity. In fact, researchers in Sweden conducted a study whereupon a strain of human milk protein consisting largely of alpha-lactalbumin was able to induce apoptosis (programmed cellular death) of cancer cells while leaving healthy cells intact. These same researchers have further isolated the co-factors required by the process from which alpha-lactalbumin converts from its native state to the anti-tumourous folding variant now identified as HAMLET (human alpha-lactalbumin made lethal to tumour cells). Furthermore, on a more prevalent level, several clinical studies have determined that bovine alpha-lactalbumin is highly effective at reducing stress. The mechanism of action behind this extraordinary claim is that it raises brain serotonin activity while simultaneously reducing cortisol levels. This opens the potential of alpha-lactalbumin for use as a sleep aid, and its cortisol-reducing ability makes it a useful addition to the supplement protocol of anyone dealing with stress. Alpha-lactalbumin has also been studied for its influence on longevity, and in-vivo research among laboratory animals has indicated that it has a dose-dependant effect on life expectancy rates. Furthermorethere has always been a glutathione-enhancing capability attributed to whey protein in general and alpha-lactal,bumin in particular. This capability is based on the intracellular conversion (by alpha-lactalbumin) of the amino acid cysteine to glutathione. A quality whey protein supplement will often consist of about 20% alpha-lactalbumin, and Advanced WheyTM from AORTM has been formulated to consist of more than 36% alpha-lactalbumin.

Lactoferrin’s prominence in whey protein far exceeds its relatively minute size. In spite of its weight of only 80 kilodaltons at its most elemental level, Lactoferrin contains 703 different amino acids. Lactoferrin is an iron-binding whey fraction that has been known to demonstrate an impressive anti-microbial capability comparable to that of alpha-lactalbumin in addition to being able to control inflammation and cholesterol. Scientists have identified lactoferrin’s anti-inflammatory capabilities through its stimulation of the anti-inflammatory cytokines (intracellular messengers) IL-4 and IL-10, and its simultaneous inhibition of the pro-inflammatory TNF-a and IL-ß cytokines. Lactoferrin’s effects on cholesterol levels seem to be based on its ability to reduce the oxidation of LDL cholesterol, an important function considering how oxidized LDL cholesterol can damage artery walls and set the stage for mineral and fat deposits which lead to blockages. Lactoferrin also appears to be the transporter of iron in breast-milk, thus serving as the source of essential amounts of this mineral to nursing infants. Its multifunctional role also encompasses antibacterial, antiviral, antifungal, antioxidant and immunomodulatory activities.

Lactoferrin’s multi-faceted applications make any single mechanism of action challenging for scientists to isolate, but most seem to agree that it begins with lactoferrin’s ability to bind to iron. Iron is essential for the growth of pathogenic bacteria and is also a major contributor to the generation of reactive oxygen species. This would go a considerable distance towards explaining the anti-microbial, antioxidant, anti-inflammatory and immunomodulatory activities of lactoferrin. Lactoferrin forms a much smaller percentage of whey protein than does alpha-lactalbumin. Advanced Whey from AOR has been formulated to contain up to 28% more lactoferrin than other high-end whey proteins currently available.

The world’s leading protein researchers and industry leaders have been gathering once a year for the last four years to exchange information exclusively or primarily on the latest developments in whey. Sialic acids (sugar molecules that are part of the glycomacropeptide content of whey protein) ranked as among the most heavily-discussed topics in one such conference held in Chicago, Illinois in September of 2005. There is also clinical evidence demonstrating that sialic acids may be responsible for the ability of glycoproteins (similar to the type found in whey) to bind to E.coli and other types of bacteria and thus preventing their adhesion to the epithelial cell surface, thereby preventing infections from occurring. Furthermore, there has been recent evidence showing that the avian influenza virus (H5N1) has a propensity to attach itself to two particular types of polymers that are themselves linked to sialic acid, thus opening the possibility of sialic acid’s potential effectiveness against this latest global health concern. While even the identification of sialic acid content at all would be an innovation in its own right for most whey proteins, the 6-8% sialic acid content of the glycomacropeptide fraction of AOR’s Advanced Whey represents an amount that is unsurpassed by any other whey protein available.

The widespread health applications of whey protein are heavily dependent on its alpha-lactalbumin, lactoferrin, and sialic acid content. The addition of these fractions is costly, which may largely explain why their benefits are not emphasized in most whey protein supplements. Advanced Whey from AOR reinforces these fractions with extra amounts over and above those which are naturally found in whey protein. The result is a whey protein with augmented – and unsurpassed – amounts of alpha-lactalbumin, lactoferrin, and sialic acid. This fortifying triad embodies the better part of a decade of research designed to transform a supplement staple like whey protein into a nutraceutical innovation.

Be the first to review “Advanced Whey-Unflavoured” Cancel reply